Thunderbolt 3 enabled a number of interesting use cases that just weren’t possible with older high-speed external interfaces. The technology allows four lanes of PCIe 3.0 to be available through a USB Type-C interface, which can be combined with power, DisplayPort video, and other forms of data. As a result, one of Thunderbolt 3’s most important use cases used it to connect an external GPU. DIY enthusiasts have tried this with Thunderbolt 2 cases before, but there was no official support from the vendors. That changed with Thunderbolt 3 and the creation of an official eGFX standard.

Nowadays, a number of eGFX boxes are already available on the market. For today’s review, we take a look at PowerColor’s Gaming Dock eGFX case and their Radeon RX Vega 56 Nano GPU. In addition to looking at the eGFX configuration itself, we also take the opportunity to determine how the performance of the same eGFX solution may vary from system to system with different capabilities, to give us an idea of the influence of the host system. performance against GPU or bandwidth bottlenecks.

The rise in popularity of Thunderbolt 3 has prompted vendors to create a whole new category of eGFX enclosures. These enclosures connect through a Thunderbolt 3 Type-C interface to the host system. Inside the case we have room for a GPU (expansion card) with a PCIe 3.0 x16 physical slot (running at x4). The enclosure also supports various peripheral I / O ports with additional bridge chips. An internal power supply is almost always included, along with power cables to support high-end GPUs that require external power inputs.

AIC GPUs (expansion cards) used in such eGFX cases are called eGPUs. AMD even has a marketing slogan to accompany the use of its cards as an eGPU – XConnect. The key aspect of eGPUs is the ability of the drivers (and hardware) to support hot-plugging and graceful behavior when disconnecting the cable. As much of the responsibility lies with the GPU drivers, the implementation of Thunderbolt 3 also affects the user experience with eGFX solutions. PowerColor is a Taiwanese supplier specializing in AMD GPUs, and as part of AMD’s push for XConnect, they have also introduced a number of eGFX cases. The Gaming Station, launched in early 2018, is the flagship of the range.

A summary of the main specifications of the Gaming Station is provided in the table below. The drop-down list in the third column also provides the corresponding information for other eGFX boxes.

PowerColor sent us the Gaming Station with their Radeon RX Vega 56 Nano to test their eGFX / eGPU solution. Consumers use eGPUs in a number of different scenarios. Performance also varies accordingly. The test results presented in the remainder of this article were obtained on a number of different systems, as described later in the article. Before that, we take a closer look at the internal components of the Gaming Station and analyze its implications.

The PowerColor Radeon RX Vega 56 Nano is an ultra-compact dual-slot graphics card intended for use in small form factor systems (mini-ITX cards). Despite its small size, the board requires external power through an 8-pin + 6-pin connector on the top. The size of the board (170mm x 95mm x 38mm) along with a 10mm length extension for the heatsink and fairing make it an ideal game in the DIY SFF gaming PC space. The card uses a single fan to help remove heat from the GPU and finned heat sink. 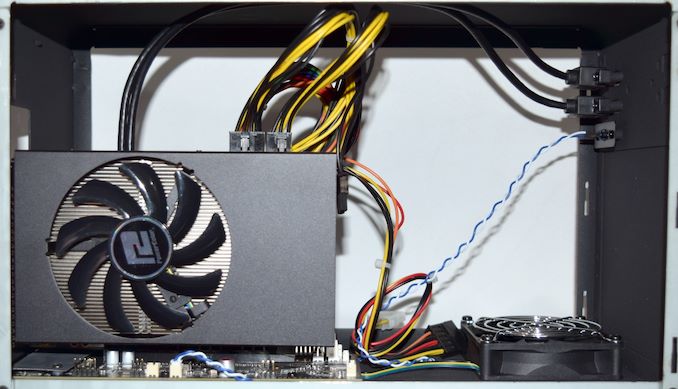 The PowerColor Gaming Station, on the other hand, is designed to accommodate extremely large GPUs with lengths of up to 310mm. For context, triple fan cards are typically 300mm. The above photograph showing the amount of empty space in the Gaming Station after installing the Radeon RX Vega 56 Nano brings out this aspect. The gallery below shows the chassis design and internal components of the Gaming Station, as well as some photographs of the graphics card.

The Gaming Station has only one fan, which is located on the base towards the front of the chassis. The power supply also has its own fan. That said, the chassis is completely perforated on the GPU installation side. This allows efficient cooling from the fan (s) built into the installed graphics card. The gallery also shows a SATA data cable and a 4 pin molex power connector from the power supply. PowerColor does not advertise a SATA slot for the product, and this is likely a holdover from the platform used in the first generation PowerColor Devil Box. It is possible for users to label their own molex to SATA power cable adapter and use SATA capabilities. A hard drive is not recommended, as there is no specific location inside the chassis to mount a 2.5 “drive.

Opening the enclosure is a tool-less exercise. The four screws holding the side panels are located at the rear of the chassis and can be easily screwed / unscrewed without any tools. However, the GPU shield must be secured to the chassis with a few screws. Two rubber feet (visible in one of the gallery photos above) can be glued to the bottom of the enclosure. PowerColor also provides a 0.5m Thunderbolt 3 cable and AC power cord with the case.